CORONAVIRUS TRACED TO THE BRITISH CROWN

The Pirbright Institute is controlled by the Queen's Golden Share along with SERCO and QinetiQ (pron. kinetic)

SERCO used its control of the U.S. Patent Office to issue its British bio company a patent on the Coronavirus in record time—that's pure fraud 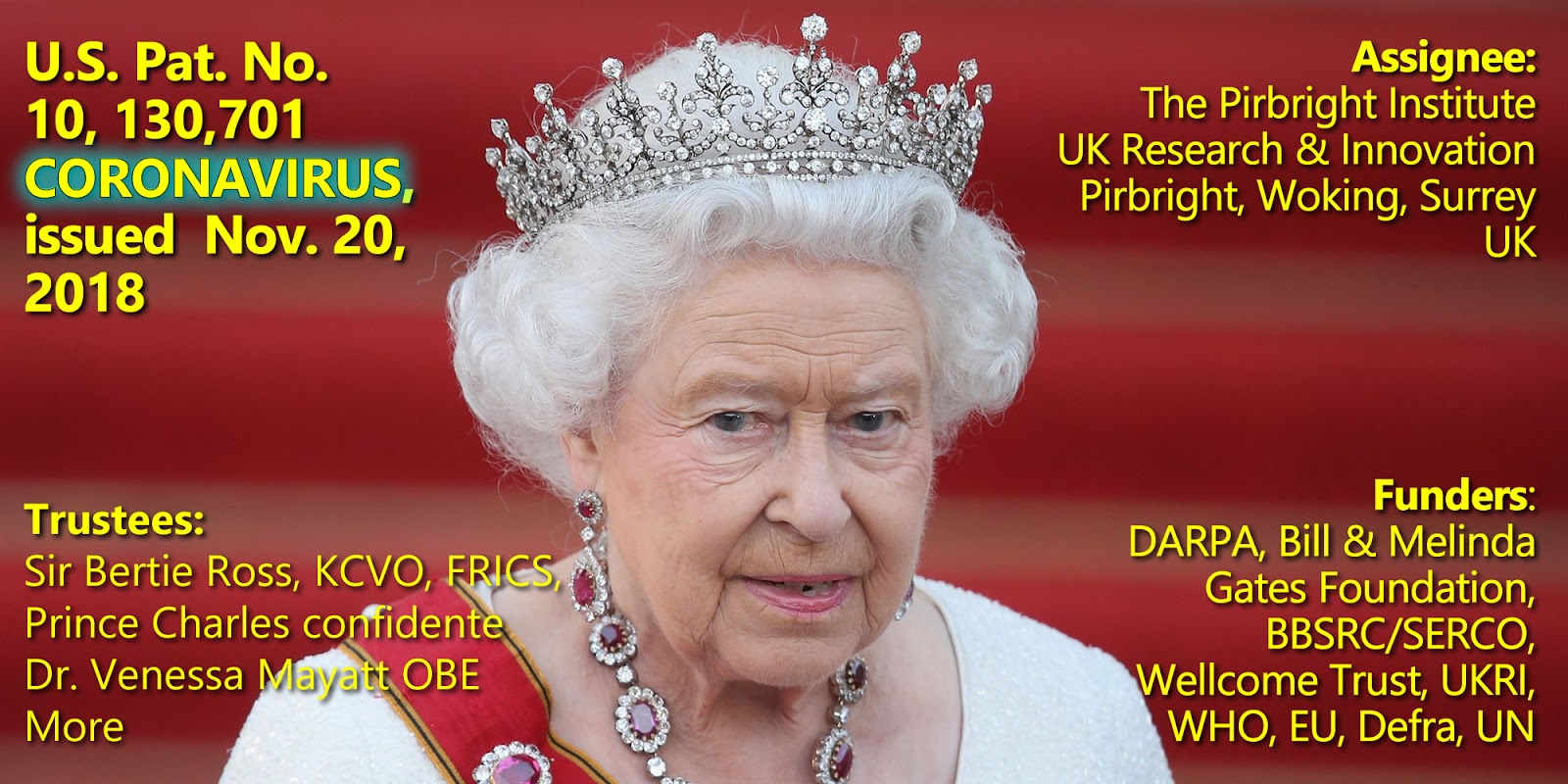 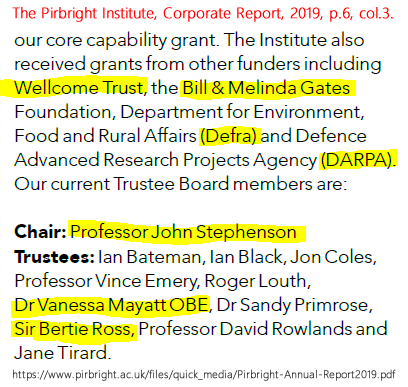 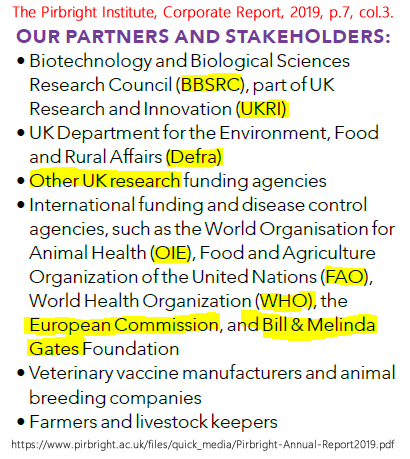 Fig. 1—The Queen's company The Pirbright Institute holds U.S. Patent No. 10,130,701 on CORONAVIRUS. Pirbright tracks back to SERCO Group Plc and QinetiQ Group Plc, which both have contracts with the U.S. Patent Office. Outrageously, SERCO essentially runs the U.S. Patent Office (under the Commerce Department) patent application process! This "inequitable conduct" in patent legal terms is fraud and invalidates the claim while the world fights this British-American Pilgrims Society-inspired emerging pandemic, in our opinion. See THE PIRBRIGHT INSTITUTE, Co. No. 00559784. (Jan. 07, 1956). Certificate of Incorporation and related records. Companies House (UK).

Queen Elizabeth II is the long-time Patron of the British-American Pilgrims Society (1902-present). Sir Henry Solomon Wellcome pharma-propagandist-spy was a Pilgrims secret founding member along with Winston Churchill, propagandist John Buchan & the Daily Telegraph and Daily Mail's Lords Burnham and Northcliffe. See The Pilgrims Society of Great Britain, United States, Profile Books, London (2002,2003) (Jan. 2002, p.1: "As Patron of the Pilgrims it has given me great pleasure to support the unique contribution which the Society has made to Anglo-American relations over the years."). See Pilgrims Society controls the Press.

AMERICAN AND BRITISH PATENT OFFICES ARE FULLY COORDINATED THEFT & WEAPONIZATION FACTORIES FOR THE PILGRIMS SOCIETY—THE TECHNOLOGY SOURCE FOR CONTINUOUS WAR: SERCO has controlled the U.S. Patent Office processes since 20006 to the present. That's right, a BRITISH company controls AMERICA'S Patent Office where America's best and brightest are fooled into thinking it is a fair process. In fact, as we shall prove below, British and American Pilgrims Society media, intelligence and banking are weaponizing everything they touch. See AFI. (Nov. 22, 2017). The Weaponization of Social Media Should Concern Us All. Americans for Innovation.

Reader Notice: New evidence is flooding in on Coronavirus and The Pirbright Institute. Therefore, rather than wait until all the evidence links are processed, we decided to go ahead and publish. Return several times over the next days to pick up the new evidence. 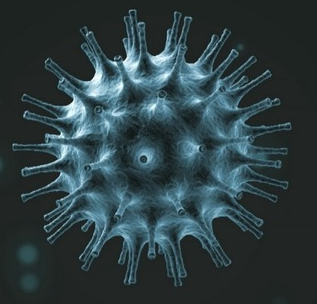 (JAN. 30, 2020)—The Coronavirus outbreak was just declared a health emergency by the World Health Organization (WHO). Tellingly, WHO is one of the Coronavirus creators, as we will show below.

The Coronavirus was invented by The Pirbright Institute at posh, well-appointed laboratories located in Woking, Surrey, England just outside London’s M25 outer belt.

Bookmark:#coronavirus-pirbright-and-serco | https://tinyurl.com/vwoeat2Click PLAY button to begin this video (which was just censored on Vimeo, Mar. 04, 2020)

Click here for an audio file only of this interview.

The Pirbright Institute is a British charity (Co. No. 00559784) that has a charter from the Queen. It is controlled by the UK Government’s Biotechnology and Biological Research Council (BBSRC). In turn, UK Research and Innovation oversees BBSRC.

BBSRC was created in 1994 by taking over the biological science activities of the Science and Engineering Research Council (SERC). In 1986, SERC was defunded by Sir Geoffrey E. Pattie, the Minister of State for Industry and Information. He simultaneously incorporated a commercial SERCO and merged RCA into it. Later he took control of Marconi, then merged it into GEC.

See also AFI. (Jan. 11, 2018). Meet The Person Who Can Remotely Crash Planes And Can Read Your Mind. Americans for Innovation.

Our research has tracked the Burroughs Wellcome & Co. involvement with bogus vaccines back to their experiments on 60,000 whites and black in British concentration camps during the Second Boer War that was promoted by the disciples of Cecil Rhodes like Viscount Alfred Milner, Winston Churchill and John Buchan, among others—all founders of the Pilgrims Society in London (1902), then New York (1903).

Fig. 5—Masks Help! A pernicious rumor circulates that surgical masks do not help protect you from breathing in the airborne Coronavirus. This makes no sense. Of course it helps. If someone sneezes directly on you from three feet away, then of course you will inhale whatever pathogens they may have. But, say you are able to place even a 2 ft. square piece of cardboard between you and in front of the sick person's face. That will stop many of the airborne particles. Not all, but many if not most. That's the benefit of a surgical mask. Is it 100% effective? No. But highly effective? Of course it is. Otherwise, doctors and nurses would not use them in hospitals and clinics so religously.

See AFI. (Jun 03, 2018). Spy-gate is directed by the Crown's courtiers in the UK, not by Russia. Americans for Innovation.

Fig. 6—George W. Bush, Pilgrims Society; progenitor of The Patriot Act where basic rights in the Bill of Rights were suspended following the Pilgrims Society fears conjured up and stoked by the MSM Pilgrim propaganda after their 9/11 false flag attack. Numerous whistleblowers have confirmed that Bush, Cheney, Rumsfeld etc. knew the attack was coming... because they ordered the C.I.A. to organize it for their Pilgrims Society brethren in Britain and the U.S.

On May 17, 2006, the George W. Bush (Pilgrims Society member) U.S. Patent Office awarded the processing of all patents to SERCO—a company controlled by the British Crown. Those contracts have been renewed and are presently in operation. See 2015 SERCO press release.

On Feb. 28, 2014, Rupert Soames, OBE, became CEO of SERCO. His brother is Sir Nicholas Soames who is also a confidente of Prince Charles .

As of May 04, 2018, SERCO had received $5.52 billion in 15,699 U.S. Government contracts (23.3 MB *.csv GSA contract data) 5,000 of those contracts were PRIME CONTRACTS (7.2 MB *.csv). This does not include contracts with various U.S. states like New York and Virginia. (These spreadsheets will download immediately in *.csv format into your designated Downloads folder. Check for them there.)

Note: The first May 17, 2006 U.S. Patent Office contract with SERCO is missing (all numbers were removed) from the federal contract databases. Researchers were told access requires a FOIA request to get it.

Tellingly, SERCO, Inc. did not incorporate in the U.S. until Dec. 29, 2008—during President-elect Barack Obama's transition, just after Pilgrims Society member Larry Summers took charge of the National Economic Council—during the 2008 banking "crisis." Clearly, SERCO had no corporate standing to start managing the U.S. Patent Office in 2006, hence the records have been obscured, no doubt using some "national security" BS excuse.

These Pilgrims Society criminals have now brought us their patented Coronavirus. 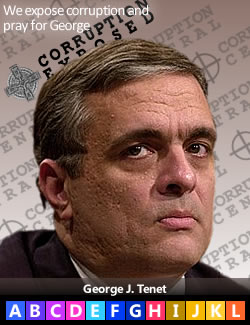 In just 17 months, the SERCO-managed patent examiner Bao Q. Li issued the Coronavirus U.S. Pat. No. 10,130,701 to Pirbright with almost no objections (that means it was probably a rubber stamp). This process normally takes three or more years.

Neither Pirbright nor the U.S. Patent Office disclosed their conflicts of interest in the issuance of this Coronavirus patent.

On the British side, everything about this Coronavirus tracks back to the Crown, the eugenics-loving Pilgrims Society, Crown Agents and her corrupt Privy Council courtiers (British Pilgrims Society suck ups).

Fig. 10—The Coronavirus is not Chinese in origin. It is a man-made British-US Pilgrims Society bioweapon invented by Wellcome Fund, Wellcome Trust, Bill Gates, DARPA, UN, WHO and EU, among others, in Pirbright, Woking, Surrey UK by The Pirbright Institute holds U.S. Patent No. 10,130,701. This proof comes from their own hand.

REMINDER RE. THE MILLER ACT NOTICE

Leader Technologies, Inc. sent their FIRST AMENDED MILLER ACT NOTICE to President Trump today. It is a contract demand for the U.S. Treasury to pay them for the federal government's 18-year theft of their social networking inventions. These inventions were stolen by Major General James E. Freeze (US Army, ret.) and Leader's patent attorney James P. Chandler, III, on behalf of Andrew W. Marshall and the Department of Defense Office of Net Assessment, and that Pilgrims Society that steals and weaponizes inventions for continuous war making and enrichment of its fascist insider military-industrial corporations.

Patriots are encouraged to help get this First Amended Miller Act Notice to President Trump and past the Praetorian Guard. See American Intelligence Media republish of the Leader Miller Act Notice.

WHO & WEF the New Totalitarian State
END_OF_DOCUMENT_TOKEN_TO_BE_REPLACED
Christianity.Expert
The Results of Idol Worshiping